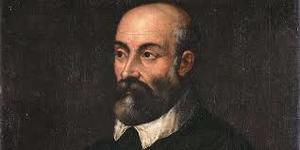 “Since we are not able to travel, I’ve put together a selection of what I consider to be artistic gems that many of you may be unfamiliar with, in essence a travelogue of artistic images. I have had the opportunity to visit all but one.”

Major artists are featured from different periods in history. The Manta frescoes are gems of the late medieval era while Andrea Mantegna belongs to the early Renaissance. High Renaissance features Leonardo da Vinci and slightly later Andrea Palladio, architect (above), and Paolo Veronese, painter. Antonio Canova was the leading sculptor of the late 18th and early 19th centuries.

Susanna Lombardi earned a graduate degree in the History of Art, University of California, Berkeley. She is an art historian and educator and has been lecturing in colleges and universities throughout the San Francisco Bay Area for the past 25 years. Since its inception in 1996, she has been on the faculty of Bay Area Classic Learning Road Scholar (formerly Elderhostel). She was also Associate Director of the Graduate Humanities program at Dominican University of San Rafael and has received numerous awards and grants in appreciation of her teaching. She recently published a second book with Inkwater Press, The Enigma of Mary Magdalene: A Pictorial Narrative.